This is a excellent article that critiques gender identity within the revised VEYLDF and provides links to a range of useful papers and research around gender identity and gender equity. This artile goes some way to support early childhood educators as they require to create inclusive and equitable learning environments for all children.

Gender Identity and Expression in the Early Childhood Classroom: Influences on Development Within Sociocultural Contexts

This paper describes a study that highlights the central role of narrative in play and how it can be a rich venue to explore the ideas of difference and similarity, particularly relating to gender preferences and expression.

When do children develop their gender identity?

by Vanessa LoBue (2016), in The Conversation

This article provides information about how gender identity develops and young children’s thinking about gender.

We trust children to know what gender they are – until they go against the norm.

This article discusses the development of gender identity. She provides current research that challenges traditional views of gender identity. For example a macro survey of transgender adults conducted in the US indicated that a large proportion of respondents knew at an early age what their true gender was – they just kept it under wraps because of social stigma in their childhood years. So we could say that gender-creative children can possibly know their gender – and do, at a very young age.

This article provides practical information and strategies for supporting and including LGBT families in early childhood settings.

Published by the Human Rights Campaign. This paper addresses LGBTQ and the importance of parental support. 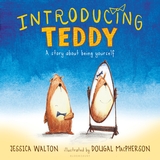 Introducing Teddy by Jessica Walton
Read the background to this book and also explore Jessica’s website. Jessica was a key panel member in the AGECS Forum on Gender Identity on 28 February 2017